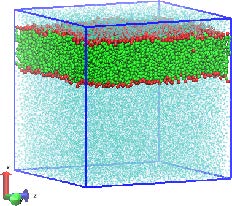 The code is modular in structure: similarly functioning subroutines (e.g. pairwise interaction calculations) are grouped together, making it straightforward to find particular functionalities in the code and to add new features. It is well documented: both a user manual and a descriptive article [1] are available.

What can the software do?

DL_MESO_DPD can model a variety of non-bonded interaction potentials between particles. Specifically, it has implemented a Standard DPD model (Groot-Warren) [2] as well as a version of the many-body (density-dependent) DPD [3, 4, 5] , Lennard-Jones[6] and Weeks-Chandler-Andersen [7] potentials, along with the DPD thermostat or alternative pairwise thermostats: Lowe-Andersen [8], Peters [9, 10] or Stoyanov-Groot [11]. A variety of bonded interactions (stretching, angles and dihedrals) are available for representing longer molecules as joined chains of particles. Charges can also be applied to particles and the associated electrostatics calculated using Ewald sums along with either Slater-type (exponential) [12] or Gaussian [13] charge smearing to prevent collapse of soft ions.

E-CAM’s Work-package 4 (WP4) – Meso- and Multi-scale Modelling, makes use of the DL_MESO_DPD code. Two important applications of this code within E-CAM are :

a) development of algorithms to apply charge dipoles and other multipoles to particles with soft repulsive potentials. This work is in the context of an E-CAM pilot project in collaboration with industry: Polarizable Mesoscale Models ;

b) Improve scalability of the code. In this context, E-CAM has already developed the first GPU version of DL_MESO_DPD code on Nvidia GPUs and this effort will be further developed in the coming months.

New software modules based on DL_MESO_DPD and associated to points a) and b) above were recently reported in deliverable D4.2.: Meso– and multi–scale modelling E-CAM modules I. These codes are also available from WP4 software repository.